What Is DNS Spoofing And Amplification Attack Explained By Hax4Us

By lokesh 02:00 OTHERS Leave a Comment
What Is DNS Spoofing?
DNS Spoofing (sometimes referred to as DNS Cache Poisoning) is an attack whereby a host with no authority is directing a Domain Name Server (DNS) and all of its requests. This basically means that an attacker could redirect all DNS requests, and thus all traffic, to his (or her) machine, manipulating it in a malicious way and possibly stealing data that passes across. This is one of the more dangerous attacks as it is very difficult to detect, but today I will show you both how to perform it and how to detect if it is being performed by somebody else on your network. 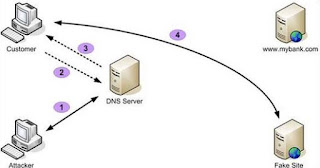 DNS Amplification Attack ?
A DNS amplification attack is a reflection-based distributed denial of service (DDos) attack.
The attacker spoofs look-up requests to domain name system (DNS) servers to hide the source of the exploit and direct the response to the target. Through various techniques, the attacker turns a small DNS query into a much larger payload directed at the target network.
The attacker sends a DNS look-up request using the spoofed IP address of the target to vulnerable DNS servers. Most commonly, these are DNS servers that support open recursive relay. The original request is often relayed through a botnet for a larger base of attack and further concealment. The DNS request is sent using the EDNS0 extension to the DNS protocol allowing for large DNS messages.  It may also use the DNS security extension (DNSSEC) cryptographic feature to add to the size of the message.
These amplifications can increase the size of the requests from around 40 bytes to above the maximum Ethernet packet size of 4000 bytes. This requires they be broken down for transmission and then reassembled, requiring further target network resources.  A botnet's many amplified requests enable an attacker to direct a large attack with little outgoing bandwidth use. The attack is hard to protect against as it comes from valid-looking servers with valid-looking traffic.
DNS amplification is one of the more popular attack types.  In March 2013, the method was used to target Spamhaus likely by a purveyor of malware whose business the organization had  disrupted by blacklisting. The anonymity of the attack was such that Spamhaus is still unsure of the source. Furthermore, the attack was so severe that it temporarily crippled and almost brought down the Internet.
Proposed methods to prevent or mitigate the impact of DNS amplification attacks include rate limiting, blocking either specific DNS servers or all open recursive relay servers, and tightening DNS server security in general. 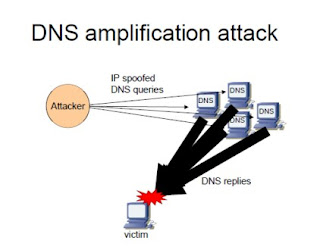 Note :- Guys If You Have Any Problem Regarding This Post So , You Can Ask In Comment Box. Thanx For Reading Carefully..!!

If You Enjoyed This, Take 5 Seconds To Share It